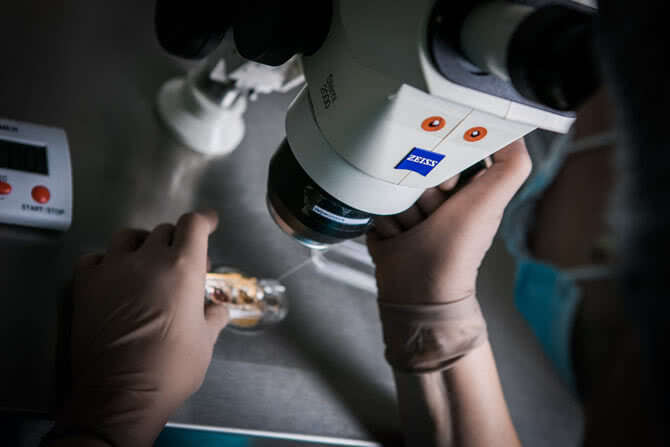 One of the most common causes of male infertility is the lack of sperm in the ejaculate (seminal fluid). This pathological condition is called azoospermia. The disease is detected using a simple procedure associated with the collection of seeds and microscopic analysis of its sediment during centrifugation. This ailment has two forms:

However, such a serious disease does not preclude the possibility of acquiring long-awaited offspring. In this case, there is no need to resort to the help of a surrogate mother. A man can be helped by a procedure under the abbreviated name TESA. This is essentially a testicular biopsy. A needle is inserted into the front of the organ to collect the seed and a small piece of tissue. Mobilized healthy spermatozoa with completed spermatogenesis are found in the extracted material, after which they can be used in IVF and ICSI procedures.

The causes of obstructive azoospermia, most often, are infectious diseases of the genital organs, hypothermia, vitamin deficiency.

Secretory azoospermia is associated with a malfunction of the testicle itself, as a result of which it does not produce male cells. Pathology occurs for the following reasons:

After taking a biopsy and a piece of testicular tissue, the material is sent to the endocrinologist for examination. If spermatozoa are found in the fluid, it is necessary to identify the most healthy and functional cells for the ICSI procedure (“manual” sperm injection into the egg). Selection is made taking into account the following criteria:

If TESA was produced successfully (it was possible to collect enough functional sperm), the cells can be introduced into the egg membrane after 72 hours. In addition, sperm can be frozen, which helps to avoid a second biopsy at the first adverse outcome of IVF or ICSI.

Although TESA is a procedure that has recently entered practice, its performance indicators are very high. If earlier the diagnosis of azoospermia meant one hundred percent infertility of a man, now with the help of seeding and injecting it into the egg, the number of people experiencing the joys of fatherhood has increased.

Such a question as infertility treatment in men, sometimes, can not do without this procedure.