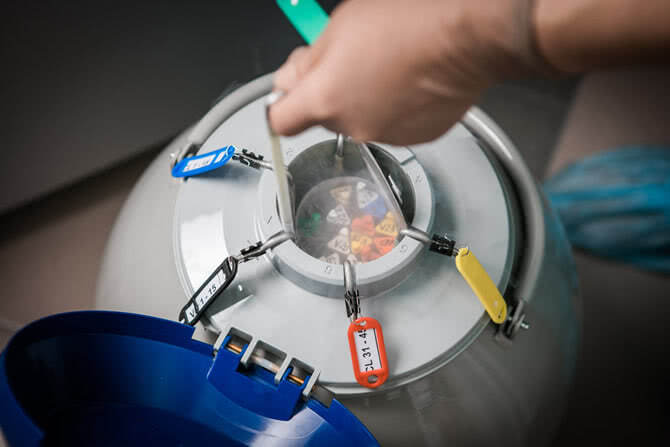 It often happens that during the IVF protocol (in vitro fertilization) it is possible to obtain several “quality” embryos. However, in order to minimize the risk of multiple pregnancy, only two or three of them are transferred to the patient’s uterine cavity. The remaining embryos are recommended to be kept for the future - to freeze. For this, modern cryotechnologies are used, in particular, the method of vitrification of embryos. With its help, an instant freezing of the embryos is performed, so that the embryos can be successfully used in subsequent IVF protocols.

Vitrification of embryos is a special method of cryopreservation, the essence of which is ultra-fast freezing. The main feature of this method of preserving embryos and other biomaterials is that the liquid in the material does not crystallize, but takes a glassy shape, which avoids damage to cells during defrosting.

As a rule, vitrification of embryos is performed in specially equipped laboratories by qualified personnel for 3-5 days of the "life" of the embryo. Statistics show that the survival rate of embryos during conservation in a similar way is 99 percent. In addition, in the course of numerous studies, scientists were able to prove that malformations when planting thawed embryos are no more common than when planting "fresh" embryos.

The emergence of a new method of cryopreservation has become a real revolution in reproductive medicine. Doctors got the opportunity to delay the transplantation of full-fledged embryos for the required period of time (until the next menstrual cycle, the required thickness of the endometrium, etc.).

In addition, if the IVF protocol was unsuccessful, vitrification of the embryos makes it possible in the next cycle to perform a new transplantation of the embryos already prepared for this. In this case, the female patient does not need to undergo the stimulation and the procedure for obtaining mature eggs again, which significantly saves time, financial resources and effort.

Thanks to this method of high-quality preservation of embryos, the doctor has the opportunity to prescribe the procedure for transferring embryos on the day when the probability of pregnancy will be maximum, and also minimize the possibility of multiple pregnancy. As a result, the couple can determine the desired number of unborn children.

How is the vitrification procedure?

The embryos obtained as a result of successful fertilization are transferred to special containers, after which they are immersed in a tank with liquid nitrogen, the temperature of which is -196 degrees. In a similar way, embryos can be stored for a long period of time, until the next defrosting and intended use.

The defrosting process is also quite simple: the embryos are extracted from liquid nitrogen and placed in the so-called culture medium, due to which it is possible to remove the remnants of the cryoprotectant, which is used for freezing.

When is embryo vitrification indicated?

Vitrification of embryos is recommended not only when receiving an excessive amount of “quality” embryos in the IVF protocol, but also in the following cases:

- if the patient has an increased risk of ovarian hyperstimulation syndrome;

- in the process of embryo implantation, diseases such as uterine underdevelopment, endometrial polyps, etc;

- on the day of the embryo transfer, the patient showed bleeding or other health problems.

In addition, many scientists argue that during the IVF protocol, it is preferable to use those embryos that have been vitrified. Numerous studies confirm that when replanting thawed embryos, the risk of premature birth, as well as the birth of a dead child, is significantly reduced.