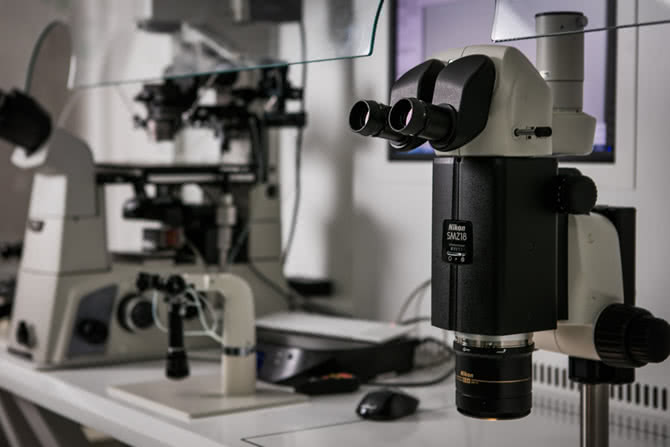 One of the most common causes of male infertility is obstruction of the vas deferens. This type of ailment is called obstructive infertility. For many years, microsurgical operations have been used to solve this problem, but it should be noted that the percentage of their success is quite low.

Modern technologies allow avoiding surgery and at the same time give a man the joy of fatherhood. These are innovative TESA and PESA methods. The essence of these manipulations is as follows: part of the tissues and seminal fluid are taken from the male testicle. By selection, one or more active spermatozoa with completed spermatogenesis are isolated. After the sperm is introduced into the cytoplasm of the egg and transferred to the body of the future mother. Thus, the unborn child will be completely genetically related to the parents.

TESA and PESA are variants of the same procedure - sampling of epidemic fluid for subsequent sperm excretion. However, there are differences:

Both procedures represent the first stage of IVF - in vitro fertilization of the egg. Of course, TESA and PESA are not able to solve the problem of obstruction of the vas deferens, however, they effectively help to go directly to the stage of embryo development.

A prerequisite for the procedure is the presence of seminal fluid in the tissues of the testicles. The more normal motile sperm cells can be extracted, the higher the probability of successful fertilization. The question of the use of sperm is decided by the embryologist. Sometimes it happens that fertilization is impossible, since there are no functional male germ cells in the seed fence (their spermatogenesis may be impaired due to prolonged obstruction of the vas deferens).

These operations are usually performed on the day when a woman's egg is taken. After extracorporeal administration of sperm, the embryo is stored in special incubators for several days, after which it is transferred to the woman’s body. The remaining sperm are mandatory for freezing. This is necessary so that, in the event of an unsuccessful IVF procedure, there is no need to again biopsy the testicle or appendages.